We are thrilled to be bringing back a fan favorite event in the Spring of 2023. Held at Santa Anita Race Track, join Las Floristas for a “Day At the Races”. This event will combine friendship and fundraising as we learn more about Las Floristas funded programs and raise money to continue their support while we enjoy a memorable horse racing experience. 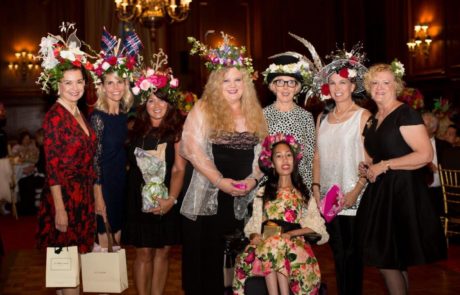 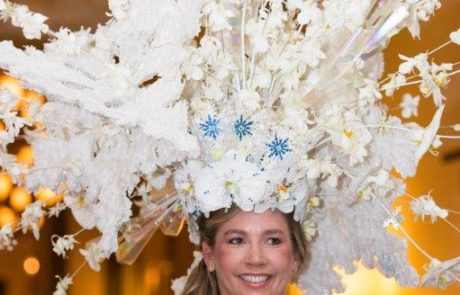 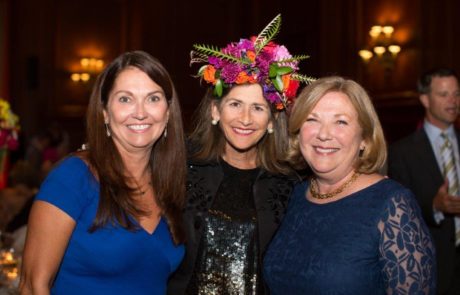 The Headdress Ball Throughout the Years

Evolution of the Headdress

The first headdress was worn at the 1938 ball held at the Victor Hugo restaurant in Beverly Hills. These headdresses were no larger than over-sized hats, but completely covered with flowers.

1938 – First Flora Headdress Ball, called Bal de Tete and named after a ball held in New York. Cost of a ticket per person was $3.00
1939 – Second ball, themed Ferdinand the Bull. After all, Ferdinand was one of us…he loved flowers too!
1943 – Las Floristas patriotically diminished its floral productions in keeping with the times – World War II. But in it’s stead, they staged a wrestling tournament. World champion Jim Londos was matched against Hard-Boiled Haggery at the Olympic Auditorium with a net proceeds to Las Floristas of $1100.00!
1946 – This was the year of the first light-headed dress which electrified the audience, but nearly electrocuted mannequin Helen Tuttle.
1950 – A return to the Biltmore Hotel and “Showtime.” Due to the low entry door, mannequins were conveyed via wheelchair to their starting point. Vera Neil Olney appeared as Cinderella, complete in burlap..minus a headdress, singing “A dream is a Wish your Heart Makes”. As she reached a far corner, she vanished in a puff of smoke and reappeared in Cinderella’s ball gown with a pumpkin coach on her head. The prize-Most original, but a new rule was made-no singing!
1954 – The coconut Grove was turned into Neptune’s Kingdom and Gertrude Forthman brought the house down as “Queen of the Sea”…with a surprise entourage of 3 tiny sea sprites, hidden somewhere in the ambassador until their appointed appearance.
1955 – Although the ball had been televised a number of times , this was the year that the ball had the distinction of being the first remote color TV presentation in the world.
1958 – The first ball at the Beverly Hilton “Floral Fantasies”.
1960 – An orthopedic surgeon was enlisted to supervise the design of a substantial back brace and rules as to height, width and weight of the headdresses.
1963 – Las Floristas celebrated its silver anniversary .
1970 – The Century Plaza was the location of our carnival themed ball.
1980 – Bob Hope was our honored guest. That year the Bob Hope Audiology Suite at Rancho Medical Center was given in his honor by Las Floristas.
1988 – Las Floristas Golden anniversary and the dedication of the CART facility.
1990’s – Donation of court facilities for the Las Floristas Wheelchair Sports Program and computer equipment for Rancho’s Pathokinesiology Laboratory.
2000’s – Las Floristas passes the 10 million dollar goal for donations to Rancho Los Amigos.

To date we have raised over $15 million dollars for the children and families at Rancho Los Amigos.